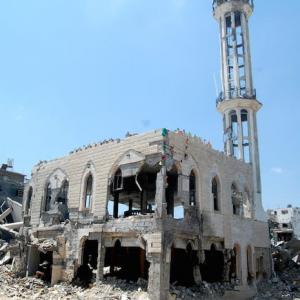 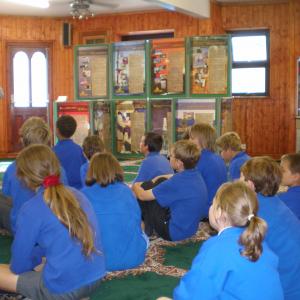 MUCH OF GAZA HAS BEEN REDUCED TO RUINS, EVEN ITS MOST SACRED PLACES.

The 2014 conflict in Gaza devastated over 100 of the most beloved and sacred places of Islam. Mosques do not only provide a place for the most important pillar of faith; they are also the heart and soul of every Muslim community. At times of great difficulty, the people need these places even more to share their pain, to support each other and receive comfort from Allah (SWT).

UK Islamic Mission and our generous supporters have been working constantly to rebuild lives in Gaza for years. Together we have relieved suffering by providing emergency food, clean water, livelihood support for families, orphan and hafiz Qur’an sponsorships. We have rebuilt 5 mosques which are serving thousands of people daily: Al-Noor, Omer Farooq, Bilal bin Raba, Ibrahim and the 565-year old Masjid Mahkamah.

We are now continuing to rebuild lives and give peace to peoples’ hearts with Masjid Ahl al-Jannah, providing a safe place for up to 1,000 Muslims, including sisters, to pray together as a community in Eastern Gaza. The mosque madrasah will help to build Gaza’s future by encouraging and supporting children to memorize the Holy Qur’an and learn about Islam. Alhamdulillah, this mosque is nearly finished. We are asking donors to help complete this House of Allah (SWT) in the Holy Land of Palestine. May it provide you and your family with Sadaqah Jariyah and build your house in Jannah, Ameen.

The Prophet (peace be upon him) said:

You will provide funding to help Building Masjid Ahl al-Jannah, a Sadaq Jariya for you and your loved ones.